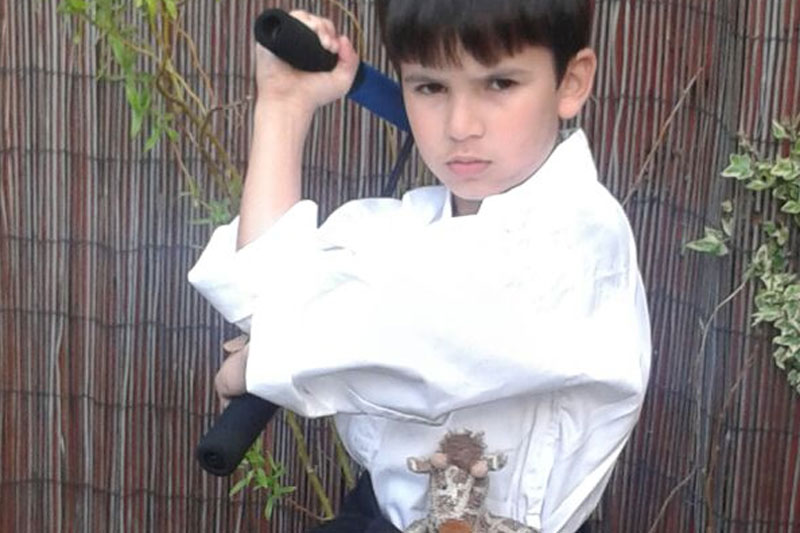 Warrior Martial Arts are affiliated to the British Ju-Jitsu Association who are the governing body for Ju-jitsu in Great Britain, as part of the Jujitsu syllabus we train in Kobudo which is the use of the weapons.

In addition to Ju-jitsu most of our Clubs also train to Kobudo weapons where the students can study to gain Dan grades in Kobudo and become an expert in the use of Martial Art Weapons. Each weapon is studied in three levels. We select 4 weapons and must complete the 3 levels in the 4 weapons before we can train for our Dan Grade.

We usually find that most of the techniques we practice using a weapon are also trained empty-handed. Most of our Kobudo weapons are used to block, parry, strike, throw, lock, thrust etc. The weapons with blades are also used to cut, stab, slash etc. With weapons, when we talk about throwing we are not going to throw the weapon, we are going to use the weapon to assist us to throw our opponent to the ground.

A short stick used in either hand for locking, trapping, striking, throwing.

This is used similar to the Yawari but it is also large enough to be used in a 2 handed grasp.

This weapon is longer than the previous two and can be used in either hand or with both hands. There are more manipulations and stronger techniques possible with this weapon. User can also keep attacker at a range whereby they cant make contact and still be in range of assailant by using the weapon.

Traditionally this weapon was a walking staff. Similar usage as the Bo, it can be used to implement variations of most techniques that can be applied empty handed.

This is the longest of the staff weapons 5ft 11½ in. The Bo was used as a walking stick or an aid for carrying objects. The objects were suspended on either end of the Bo and then placed over the shoulder. This is a formidable weapon capable of breaking the Katana blade and useful in keeping your opponent at a greater range.

This weapon has found a place in the modern police forces in the Western World. The new name given to this weapon is the side handle baton. The weapon was conceived in Okinawa and originally was the handle of the grinding wheel that the farmers used to grind their rice.

Traditionally this was a rice flail made of 2 pieces of wood (usually oak). The 2 pieces were joined to one-another at one end by a piece of leather. As a weapon it is used to keep an assailant out of an affective fighting range by various manipulations, or, used to apply locks and throws, or, used to strangle or choke, or, used to disarm an opponent.

Sometimes referred to as the short sword. This weapon occurs through out Asia and is made of steel and is shaped like a trident with a long central blade and a shorter blade on each side. In Japan a similar weapon was used, the Jute. The Jute only had one side prong as opposed to the two of the Sai.

This is a farming tool that was used for the harvesting of the rice crop. As a weapon it is used singly or in pairs. There are examples of this farming tool through most agricultural nations but no history of it being developed as a weapon any-where else.

Some regard this as a member of the spear family and some regard it as a member of the sword family. The Naginata dates back to the 7th and 8th centaury and the blade was of similar construction as the Katana blade but it was mounted on a stout shaft which was longer than the blade; the blade could be as much as 36 inches long. The Nagemaki on the other hand had a longer stouter blade and was mounted on a shorter handle. Yari the spear replaced the Naginata around about the 15th century.

This is the various ways in which the sword is drawn from the saya into an offensive against an opponent. From drawing the sword to returning the blade to the saya is the art of Iai-jutsu.

There are four areas of practice within Iai-jutsu;

There are several techniques within each of the four areas of practice that must be practiced and there are many combinations from those techniques that can be used. The objective of Iai-jitsu is to achieve unification of spirit and technique.

View all our locations

You can find out more about which cookies we are using or switch them off in settings.

This website uses cookies so that we can provide you with the best user experience possible. Cookie information is stored in your browser and performs functions such as recognising you when you return to our website and helping our team to understand which sections of the website you find most interesting and useful.

Strictly Necessary Cookie should be enabled at all times so that we can save your preferences for cookie settings.

If you disable this cookie, we will not be able to save your preferences. This means that every time you visit this website you will need to enable or disable cookies again.

This website uses Google Analytics to collect anonymous information such as the number of visitors to the site, and the most popular pages.